After a surprisingly active month of July, the housing market saw a slowdown in August, mostly due to the low number of listings. For more on this, here’s our summary of what’s happening in the property space.

According to REINZ’s latest property data, the number of residential properties sold across New Zealand in August dropped by 6,1% from a year ago (and by 6.9% excluding Auckland).

“This was a bit of a surprise given the strength of July’s figures, however, an extremely wet August across most parts of the country and the past three months having the lowest number of new listings of any consecutive three months since records began in 2007, look to have been contributing factors,” said REINZ CEO, Bindi Norwell. 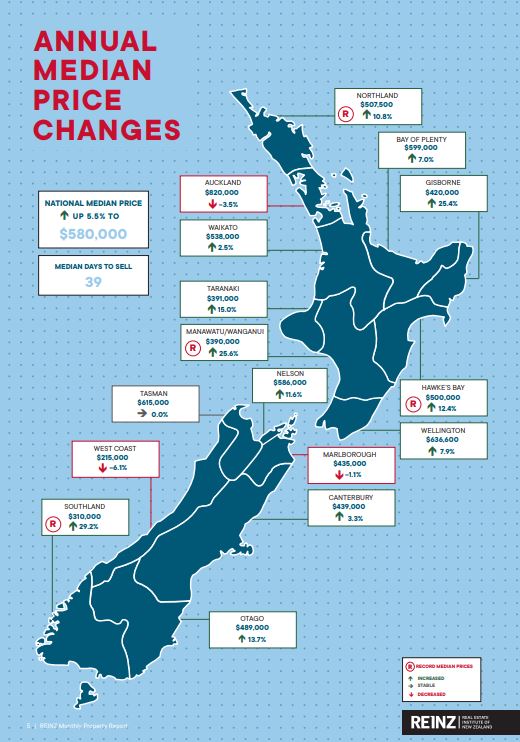 How low listings impact the market

If you’re planning your next property move and cautiously weighing your options, you’re not alone.

“With limited choice in many parts of the country in terms of new listings, we’re hearing from a number of agents that people are waiting to purchase before they put their own property on the market, which is slowing the whole market down,” said Norwell. “Hopefully, as confidence starts to improve over the coming months, we’ll start to see this flow through to new listings which leads to more choice for buyers.”

Over the past few years, ‘affordability’ has been the buzzword in the New Zealand’s property market. But what does ‘affordable housing’ currently mean?

Plus, falling interest rates are pushing up lower quartile house prices in several regions. In August, Canterbury was the only region nationwide where the lower quartile price dropped instead of increasing. And in seven regions (Bay of Plenty, Waikato, Hawke’s Bay, Manawatu/Whanganui, Taranaki, Otago and Southland), lower quartile prices reached record highs – increasing the size of the required deposits.

As mortgage advisers, we work hard to help New Zealanders make the most of their property opportunities. Whether you’re looking for the right mortgage for your first home or would like to pay off your existing mortgage faster, please get in touch. We are committed to helping our clients get a foot on the ladder at a price they can afford, and make home ownership the wealth-building tool it can be.